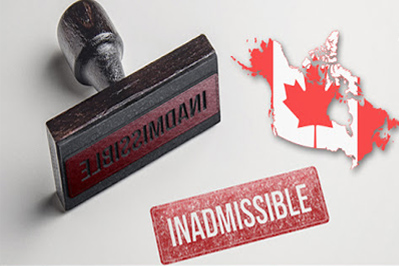 Many people wishing to enter or immigrate to Canada are surprised to learn that a prior criminal record can result in a Canadian Immigration Officer refusing their entry, or application, on the basis of criminal inadmissibility. If you have been found to be criminally inadmissible to Canada, or think you may be inadmissible, it is important to know that you still have options.

∎ Criminal grounds – any conviction on criminal grounds renders a foreign national inadmissible whether the offence was committed in Canada or abroad (minor and major criminal offences are included)
∎ Misrepresentation – any misrepresentation done in front of immigration or associated government departments renders a foreign national inadmissible
∎ Medical reasons- reasons for medical inadmissibility include a serious health condition or contagious diseases which have the potential to burden Canadian healthcare system
∎ Failure to comply with any laid down Canadian immigration and associated laws
∎ Financial grounds- a foreign national has shortage of resources to maintain themselves in Canada
∎ Security grounds
∎ Previous criminal offences, with convictions outside Canada are also considered

A foreign national or permanent resident may be criminally inadmissible or face removal proceedings on the grounds of serious criminality. For convictions within Canada, if they have been convicted in Canada:

∎ Of an indictable offence punishable by a maximum sentence of at least ten years; or
∎ Received a prison term of at least six months.

If they have been convicted outside Canada of an act that, if committed in Canada, would be equivalent to:

There are three main methods available for people who wish to come to Canada but must overcome criminal inadmissibility:

An inadmissibility hearing with a Canada Border Services officer can also be scheduled to understand if the admissibility allegations should be followed through. The foreign national or permanent resident is given an opportunity to defend themselves.

In cases where the charges are proved, a removal order may be issued against the foreign national or permanent resident.

The foreign national or permanent resident has an opportunity to make an appeal to the Immigration Appeal Division or Federal Court depending on the case situation.

We Can Help You Overcome Your Inadmissibility

Law Wise uses its expertise to help clients overcome inadmissibility issues. We will work to understand your situation and then submit the strongest possible application to Canadian immigration authorities.

Feel comfortable interacting with us. We speak languages like English, Urdu, Hindi and Punjabi.