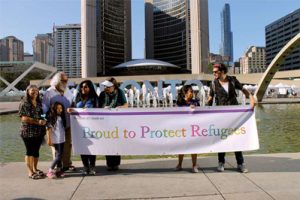 Canada has recognized this basic human right since 1951 when it signed the Convention relating to the Status of Refugees (the Geneva Convention). The right to life, liberty and security of the person is also enshrined in the Canadian Charter of Rights and Freedoms.

Who Is Considered A Refugee?

A person is considered a refugee under the Convention if they have a fear of persecution upon return to their country of citizenship or permanent residence. The forms of fear of persecution recognized internationally include: Race, Religion, Membership of a specific social group (sexual orientation/gender, etc.), Political opinion, Nationality.

The person applying for refugee status needs to demonstrate that their country is unable or unwilling to provide them with adequate state protection. The refugee or protected person applicant needs to prove that the reasons for persecution are personalized and arise from the return to his/her home country or country of legal residence. They are at risk of unusual punishment, torture or death.

A person is not eligible if:

Note: Canada has signed an agreement with the United States designating the U.S. as a “safe third country”. Claimants coming from, or even just passing through the U.S., are ineligible to make refugee claims at a Canadian border crossing by land. They will be turned back to the U.S.

Canada has obliged itself to protect genuine refugees, that is, not to send them back to persecution. People who get to Canada on their own can claim refugee protection at any border point, or inside Canada, at a Canadian Immigration Visa Office. Read about the refugee application process.

Referral to the Immigration and Refugee Board

If an immigration official considers the claimant to be eligible, then the file is transferred to an independent administrative tribunal called the Immigration and Refugee Board (IRB). The IRB determines whether the claimant is a genuine refugee and deserving of protection in Canada. The claimant is required to first complete a Personal Information Form (PIF) and submit it to the IRB. About 12 months later the claimant attends a hearing before a member of the IRB. In rare cases, where the evidence is exceptionally clear, a claimant may be accepted without a hearing.

If the IRB determines that the claimant is a genuine refugee, the claimant becomes a protected person and can apply for Canadian permanent residence inside Canada.

If the IRB refuses the claimant, an application for judicial review can be requested from the Federal Court of Canada. If the claimant does not succeed in Federal Court, then removal from Canada becomes probable.

Individuals who have a refugee claim rejected, abandoned or withdrawn may eventually apply for a Pre-Removal Risk Assessment (PRRA). This is an opportunity for people who are facing removal from Canada to seek protection by describing, in writing, the risks they believe they would face if removed.

Before removal, the claimant can ask for a Pre-Removal Risk Assessment (PRRA). The same grounds for protection are assessed as in a refugee claim, but the decision is made by a Canada immigration official instead of the IRB. In cases that have already been considered by the IRB, only changes in circumstances that have occured since the IRB decision will be taken into account. In some instances, even claimants who are ineligible to make a refugee claim are entitled to a Pre-Removal Risk Assessment (PRRA).

Refugee claims are complex and there is always a lot at stake. It is always advisable for people seeking refugee protection to be represented by a competent Canadian attorney with expertise in this particular area of the law.

At Law Wise, we understand your specific circumstances and provide appropriate solutions for them. We ensure prompt communication and a professional approach to achieve successful outcomes for you.

Feel comfortable interacting with us. We speak languages like English, Urdu, Hindi and Punjabi.